The Mathemagician is the third level, magic based character Hero Class in Guild Of Dungeoneering.

The Mathemagician begins with the Bisect Trait which adds +2 to magic attack if your opponent has exactly double your health. Bisect is highly situational, only generally coming into use when the player has four or less health. However, pairing the bisect proc with a quick spell such as Mental Maths or Flamestrike can save the character from time to time. Furthermore, pairing the Mathemagician with items with the Tenacious ability allows for greater safety in running with 2-3 health.

The strength of the Mathemagician lies in the powerful synergy with the starting deck and magic based items, making the character extremely strong in the late game. Holy, Arcane, and Growth are especially powerful, allowing the character to control the flow of battle, hinder enemies, and build up magical backlog while defending against attacks, maintaining a high health pool, and periodically unleashing build up energy with powerful spells such as Arcane barrage. In the early stages, the class should be played defensively, playing "Explain Theorem" to fill the opponents deck with stupidity, using "Card Counting" to control which card the opponents have available to play, "Calculate" and "Measure Trajectory" to maintain character health, and "Mental Maths" and "Proof" when the opportunity arises. The Mathemagician excels against Mundane targets and targets with low magic block. The Mathemagician struggles however against targets with high magical defense or offense (as the Mathemagician has no innate magical defense). Drill spiders (with bulwark) for instance should be avoided at all costs unless the character has invested heavily into Holy. 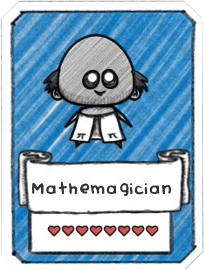