Weak against monsters with Tenacious.

A tactic can also be employed using a Cartomancer with the Cerebrate card. Arcane cards make it easy to increase your hand size, as does the Cartomancer's ability to draw cards upon taking 2+ damage. This makes it very easy to draw a full deck into your hand and spam Cerebrate to heal 3 and draw 2. In the case that another card must be played, it can be followed on the next turn with Cerebrate to again fill your hand. When sufficiently healed to 30+ health points, a Card Storm can be unleashed to defeat most enemies in one hit due to having your entire deck in hand. 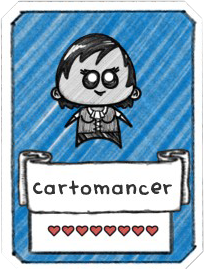 The Cartomancer class has very good synergy with the Swift and Arcane ability trees. If possible, get one or both trees to 4th level. Taking a level of Stupidity from the Net (Swift 3, Stupid 1) isn't a big issue for the Cartomancer, because you'll be drawing plenty of extra cards thanks to Rules Lawyer (If you take 2+ damage on a turn, draw a card). In the end, the Stupid card is just one more damage when you play Card Storm.

It can be tempting (and highly satisfying) to try and get your whole deck out before using Card Storm (1 magic damage for each card left in hand, discard 4), but that can lead to tragedy if you don't have enough defense or healing to soak attacks.